Big day for me!  As you know I play a lot of golf and today is my first day back on the links!  It was also a special golf day because we were playing at an exclusively private course called Victoria National which is near Evansville Indiana.  We purchased the opportunity at a charitable auction.  Like Augusta National, you can only belong to Victoria National if you are invited to join.  I can't imagine what the initiation fee and monthly dues would be!

This was a big day for me because my head has always typically sweated a lot during heavy activity and I was a bit concerned.  Naturally I wore a hat and the forecast was for a high of 78.  Fortunately, it was overcast most of the day and I didn't sweat a lot.  My head felt fine all day.  However, I was amazed at how often I tend to take my hat off during a round of golf.  I know this now because each time I reached for my hat I stopped and chose not to remove it....if possible.  Because my donor area is still tender, taking the hat on and off causes just a bit of discomfort but not that much.  Certainly not enough to keep me from golfing!

Victoria National was the most beautiful and finest course I have ever played!  Shot 41 on the front nine which included 4 three-putts!  The greens were spectacular but difficult to read and putt.  Came back to earth on the back nine and shot 51 !!!!  I'm a 12 handicapper so the front nine was super for me!  I actually hit 8 of the 9 greens in regulation.  You golfers know what I'm talking about!  Check out the photo taken of me at Victoria National on a difficult but awesome par 4. 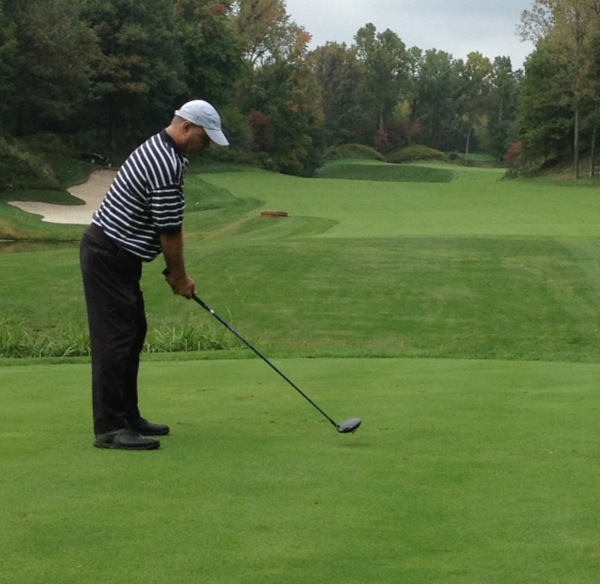